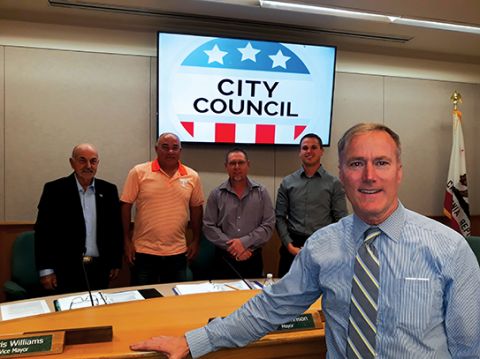 As for his resignation, Eckert states that he will be relocating to a community that “puts me closer to immediate family members.” Photo courtesy of City of Gridley

Eckert, who came to Gridley by way of the City of Mt. Shasta, has been serving the Gridley community as it has undergone some major changes and complicated work with government agencies. In his resignation letter to Mayor Bruce Johnson dated October 8th he states that “It has been an honor and a privilege to serve Gridley. I feel especially privileged to have been a part of the steady improvements to the great community.” Listing improvements in financial standings and budgets, city services, labor relations and partnerships with new and expanding developments, including the construction of the required infrastructure of the city’s industrial park, funded entirely with Federal funds, Eckert leaves behind quite a project list, some realized and some still in the works.

Although he will be leaving his position with the city in just a little over a week, Eckert says that he plans to work closely with the Mayor and city staff in the future months. “I’ve provided the Mayor an extensive transition projects list with significant supporting details identifying more than 60 projects, including project leaders and timeframes. I’ve committed to helping both online and in person after I leave.”

In his resignation letter he states, “It’s been an honor to have served you (to City Council). It has also been a pleasure working with our passionate residents and volunteers. Our current employees are tremendously talented and committed to our community.” He adds in an email to the Herald that, “I would just like to say that the City of Gridley employees are without a doubt the best employees I’ve ever worked with throughout my 32 year career.”

As for his resignation, Eckert states that he will be relocating to a community that “puts me closer to immediate family members.”